You Can Make a Difference!

One in three Americans lives within 50 miles of a nuclear power plant (MSNBC) that routinely releases radioactive poisons (EPA) into the environment, but there are no public health alerts when these invisible poisons are released into our air and water.

Utility companies are only required to make annual reports on their averaged quarterly emissions, concealing dangerous public exposure spikes. The EPA provides online near-real-time data, but only one hundred monitors are scantily spread around the U.S. and many are not recording nuclear plant emissions. To take up the slack, hundreds of citizens upload real-time radiation readings across our country. We need a multi-agency, online, real-time, national monitoring system to 'connect the dots' for public health and safety.

Commercial nuclear power companies and nuclear regulators in our own government are not doing enough to protect us from the dangers and accumulation of poisons from nuclear sources, so we call on the Nuclear Regulatory Commission (NRC) and the Environmental Protection Agency (EPA) to cooperate in protecting public health and safety by ensuring:

can be readily identified

in the event of an emergency

posted online as soon as they are planned

and alerts for unplanned releases

reporting to the public in real-time

rather than a year later

DYE-MARKERS were used as long ago as 1959 to directly observe plume travel patterns. First responders and the public need to see a radioactive plume in the event of an emergency at a nuclear power plant – so they can flee away from it, rather than into the path of the plume (a tragedy that happened to school children in Japan). This is a straightforward way to strengthen our emergency preparedness.

You can download and read the one page Petition, as well as the three page Factsheet with linked References that we presented to 4 of the 5 NRC Commissioners, 3 EPA Radiological Directors, and Congressional Committee staffers in January 2014.

And please SIGN the petition to make these changes happen! Working together, we can make a difference. You can be part of this campaign by sending the flyer and the petition link to your friends, family, and co-workers, and by posting on websites, blogs, Facebook and Twitter. You can make a difference by urging folks to SIGN this people's petition to MAKE RADIATION VISIBLE! All the Petition signatures will be delivered to the NRC and EPA to support a formal Petition for Rulemaking that will be filed on behalf of those who sign the petition and several environmental group co-petitioners.

Because we cannot see, smell or taste radiation, and because its poisoning effects are generally slow in presenting themselves, we tend to follow the old maxim "out of sight, out of mind"; but the poisons remain in our environment and enter our food chain, leading to increased risks of cancers, genetic mutations, and birth defects.

The three methods proposed to MAKE RADIATION VISIBLE, are highly achievable at a low relative cost. The safety factors for nuclear preparedness and public health and safety far outweigh the nominal costs:

1. Visible Dye-Markers require a simple fluid pipe dispenser, similar to a windshield washer spray, to disperse a non-toxic visible dye in the event of an emergency radioactive release.

3. Real-time online monitoring technology is well developed with competitive prices. Small units capable of determining quantities of specific radionuclides released from nuclear plants and uploading the data for real-time reporting to the public are readily available and are used to provide information within the plants and to outside emergency services, but are not currently providing data to the public being exposed. This modern real-time method of reporting online is far superior to manually taking quarterly samples and sending them to laboratories for analysis, the method currently applied by commercial plants for annual reports to the NRC, who then provide the information to the public. Radioactive spikes are not recorded with this method of averaging emission data, so actual exposure data is flawed and underestimates the danger.

Until we are able to bring these regulations into reality, there is one way we can make radiation visible ourselves – by measuring the radiation in our own environments. This is why we began our Radiation Monitoring Project and have created our BEST Radiation Monitoring Manual, as well as educational videos of field and home-lab tests, available on the Radiation Videos webpage. We also offer the opportunity for in-the-field project development and training by our project director, Garry Morgan.

We want to help empower communities to see for themselves just how much radiation is surrounding them, and to systematically record their findings for the scientific community and as evidence for the need to MAKE RADIATION VISIBLE with Public Health Alerts. As we said, the corporations producing the poisons are only responsible for revealing their averaged quarterly releases annually, so there is no real-time data for the public living around nuclear plants. We hope that communities and environmental groups will join this program of local radiation monitoring. (Read about our Radiation Monitoring program.)

Radioactive emissions from nuclear power plants are dangerous to living organisms because radiation damages cells at high doses and damages DNA at low doses when it enters the body. Over 100 man-made radioactive elements are produced by nuclear fission (for a bomb or nuclear power) that are alien to the natural environment. When they enter an organism, the body cannot identify the radionuclide, so it treats the alien isotope as if it were whatever element it most closely resembles or mimics in nature, its analog. Strontium-90 is closest to calcium, so it is taken up as calcium in the body and stored in the bones where blood cells are made. Cesium-137 is treated by our bodies as potassium and is stored in our muscles. These radioactive elements in the body emit radiation, basically nuking the cells and DNA around it, causing damage that sometimes is repaired by the body and sometimes is not. When cells and DNA are not repaired, radiation exposures lead to cancer and mutations – radiation exposure is a high-stakes gamble.

Dr. Helen Caldicott, is an outspoken and highly respected Australian pediatrician at Massachusetts General Hospital, who has taught at Harvard Medical School and founded several important organizations, including Physicians for Social Responsibility in the 1970s. She knows how to speak about this subject in words everyone can understand, and believes that Americans deserve to be briefed on the medical consequences of nuclear radiation in our environment. In the 13 minute interview at right, Dr. Caldicott quotes Thomas Jefferson, "An informed democracy will behave in a responsible fashion," and performs a service to us all by explaining nuclear issues in everyday language.

There are three basic forms of radiation:

Alpha radiation is in large subatomic particles which can be stopped by human skin or paper, but if inhaled or ingested, or if it enters the body through a scratch, alpha particles can rip through and damage cells in organs and blood. If the cells are not able to repair themselves, then they can reproduce into lung cancers or blood cancers such as leukemia.

Beta radiation is made up of electron particles and can penetrate the skin, so it is a threat both outside and inside the body. Externally, ½ inch of plexiglass or water can act as a shield. Internally, however, Strontium-90 is taken up like calcium in the bones which produce new blood cells, increasing the risk of bone and blood cancers like leukemia. Tritium is radioactive hydrogen and bonds with water throughout our bodies. Since water cushions our genetic material (DNA), tritium can irradiate our DNA causing mutations.

Gamma radiation are rays or waves, and the most penetrating type of radiation, stopped only by thick lead. Cesium-137 is a potassium analog and collects in muscles throughout our bodies. Note the NOAA graphic illustration at right showing how Cesium-137 circled the northern hemisphere within one month of the Fukushima-Daiichi disaster. It appears that some radiation begins to lessen, however, this only tracks aerial Cesium-137, so that means it has merely rained down into the oceans or the land, where it continues to have a half-life of 30 years (remaining radioactive for over 300 years). Iodine-131 is relatively short-lived (half-life of 8 days, about 3 months radioactive), but it readily collects in our thyroid glands where it emits both beta and gamma radiation to our surrounding tissues. Potassium Iodide pills do not prevent absorption, but they can slow the absorption in the case of a major radioactive release.

The Hybrid Single-Particle Lagrangian Integrated Trajectory (HYSPLIT) model was developed by NOAA to follow the transport and dispersion of pollutants in the atmosphere. , , , In this dataset, the simulation from NOAA's HYSPLIT model shows a continuous release of tracer particles from 12-31 March at a rate of 100 per hour representing the Cesium-137 emitted from Fukushima Daiichi. Each change in particle color represents a decrease in radioactivity by a factor of 10. Radioactivity decreases due to removal by rainfall and gravitational settling. [In other words, the radiation image decreases as particles fall out of the atmosphere to earth, but it still remains on the land or in the oceans.] Decay is not a factor for Cesium in this short duration simulation compared to its 30 year long-half life [which means it remains harmful for about 300 years]. The air concentration would be computed from the particle density so it is only partially related to the color scale. The released particles are followed through the end of April using meteorological data from the 1-degree resolution NOAA global analyses.

WHAT YOU CAN DO

Send a link to your friends

so they can learn more at

Flyers with the link

in emails, on websites,

Support Green Legislation in Your State.

And we hope you will

to help fund our efforts!

Thanks for all the good you do!

You can make a difference!
SIGN the Petition at http://www.credomobilize.com/p/MakeRadiationVisible 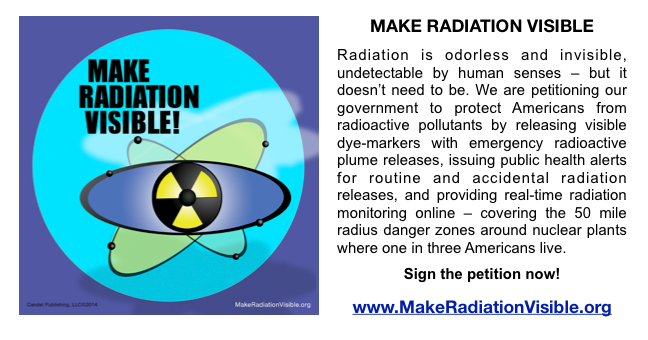 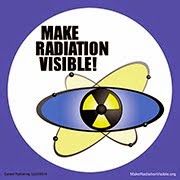 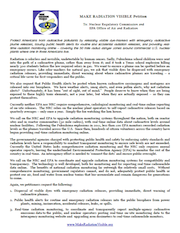 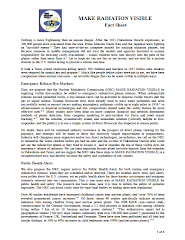 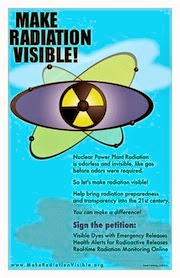 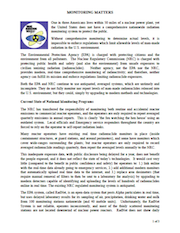 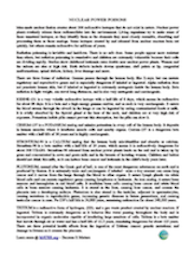 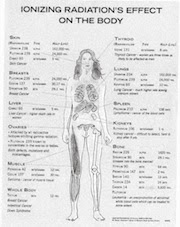 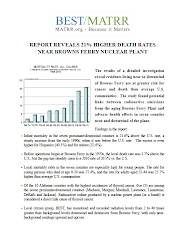 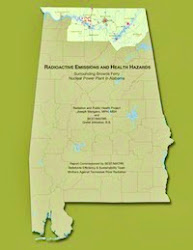 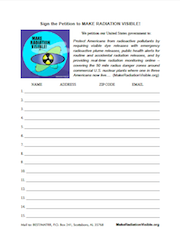 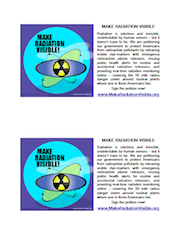